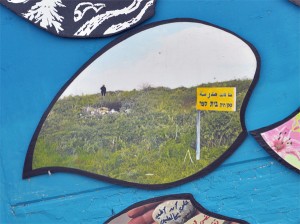 To commemorate, witness, acknowledge, and repair 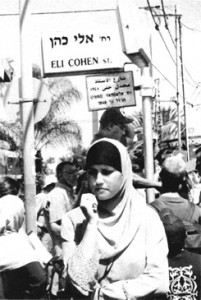 Zochrot [“Remembering”] is a group of Israeli citizens working to raise awareness of the Nakba, the Palestinian catastrophe of 1948.

The Zionist collective memory exists in both our cultural and physical landscape, yet the heavy price paid by the Palestinians — in lives, in the destruction of hundreds of villages, and in the continuing plight of the Palestinian refugees — receives little public recognition.

Zochrot works to make the history of the Nakba accessible to the Israeli public so as to engage Jews and Palestinians in an open recounting of our painful common history. We hope that by bringing the Nakba into Hebrew, the language spoken by the Jewish majority in Israel, we can make a qualitative change in the political discourse of this region. Acknowledging the past is the first step in taking responsibility for its consequences. This must include equal rights for all the peoples of this land, including the right of Palestinians to return to their homes.

The Zionist collective memory exists in both our cultural and physical space. Many monuments and road signs point out the loss of Jewish soldiers in wars, yet no indication of the destruction of Palestinian life may be found at all on our cultural and geographical landscape. The heavy price paid by the Palestinians — in lives, in the destruction of hundreds of villages, and by being uprooted from their homes — receives no public recognition. Demolished Palestinian villages are never commemorated, their names often Hebraicized and bestowed upon the new settlements established in their place. These villages are invisible spots on Israel’s landscape; only the obstinate sabra bushes serve as their silent monuments.

Palestinian pain, too, is illegitimate; all expressions of pain are considered hostile and threatening. Israel regards its Arab citizens’ grief as a threat to Jewish existence here and now. In past years Palestinian awareness of the political importance of collective memory and public commemoration of the Nakba (“disaster”), in opposition to Israeli Independence Day, has risen and become more visible. Visits to demolished villages now take a more central role in shaping the identity of Palestinian citizens of Israel, yet these are made unobtrusively and without demands that the state officially recognize their suffering.

Zionist collective memory also prevents Jews from acknowledging their part in the destruction, from accepting responsibility and, consequently, from achieving real reconciliation with the Palestinians. The Jewish people have not taken and do not take any action aimed at acknowledging their part in the Palestinians’ suffering. Any possibility for such action is immediately rejected out of fear that recognition of injustices committed will oblige the Jews to leave Israel. This paranoia is both derived from the Jewish “victim complex” and reinforces it.

Posting signs at destroyed Palestinian villages is part of a larger effort to bring civil and national equality to the country. Physically marking these villages and holding public discussions on the Palestinian Nakba may encourage a more ethical discourse and reveal both the victims and the initiators of the hardships. The act of making the destroyed villages visible is intended to set in motion a process of catharsis within the Jewish public, as well as serve as an expression of humanity.

Though mainly symbolic, posting signs is an act fundamentally connected to the past, as it constitutes recognition of the moral debt that is owed for the injustices committed in the creation of the Jewish state. The catastrophe that occurred to the Palestinians with the destruction of more than 400 of their villages demands some kind of consideration on the part of the historical victors. Simply erecting a sign that tells the story of a demolished village with dignity is recognition of the wrongs committed and the tragedy.

A sign’s existence has both aesthetic and material character. It cannot be ignored on the landscape. It is a physical monument, giving its viewer a new, more critical perspective on the reality in which he or she lives. As long as razed Palestinian villages remain uncommemorated on the Israeli landscape, their existence in the past and their destruction is repressed. Each new sign will change the experience of driving down Israel’s roads and walking on its paths. Signs erected over the ruins of Palestinian villages will represent a challenge to written history inscribed on the landscape.

Signs posted at demolished villages will invoke the question of a Law of Return for Palestinian refugees. The signs will place the question of the Palestinians’ right to return on the public agenda by testifying to that which existed here, to that which cannot be ignored forever. Jewish recognition of the ongoing refugee problem and determined striving towards an agreement on the issue of return are keys to real reconciliation between the two peoples. Without a fair solution to the problem of return, the conflict can never be resolved.

Posting signs at villages integrates the past, present and future and between the ethical, aesthetic, and political. This is taking action upon the landscape in the hope of rediscovering and remodeling it, creating a renewed landscape that will reveal the traces of what has refused to be wiped out, in spite of so many efforts. In a more just society, the politics of landscape oblige society to morally account for its past wrongdoings, an obligation whose visual expression must be exposed in the light of day.

We are a group of Israelis who aim to raise awareness to the tragedy and suffering of the Palestinian people, particularly among the Jewish population of Israel. Posting signs at demolished Palestinian villages is one way to advance this goal, but is only one element of an expansive effort to commemorate the Nakba in Hebrew. Calling attention to the Nakba in Hebrew — at schools, universities, and in other public arenas — should be an objective of all who desire mutual recognition and peace between Arabs and Jews in the Middle East. At a time when the word “mahsom” (roadblock) is so ubiquitous that young Palestinians are unaware that it’s a term belonging to the occupation, let alone a word in Hebrew, it is appropriate that Israelis think and speak of the Nakba as a way to begin to understand Palestinian suffering.

In addition to posting signs, we also suggest creating children’s games on the subject of the Nakba, organizing study tours of villages that were destroyed (including training tour guides for this purpose), manufacturing maps that include these villages, creating a database and documentation of the demolished villages, and organizing exhibitions, among many other possibilities. This will all be carried out in clear and simple Hebrew.

Highest priority for posting signs will be on public spaces such as Canada Park (built on the ruins of Emaus, Yalu, and Beit Nuba, which were destroyed in the 1967 war), in cities (such as on Ibn Gvirol Street in Tel Aviv, which borders Sumeil), and by major roads, mainly in locations where remnants of the destruction still exist today.

We seek to apply ourselves to these challenges: to commemorate and talk about the Nakba in Hebrew so that our language will be more peaceful and just; to witness what was wiped off the face of the earth in order to understand our neighbors’ pain and loss; to acknowledge the Palestinian catastrophes of 1948 and 1967 and, thereby, attempt to mold a peace-seeking Jewish-Israeli consciousness.