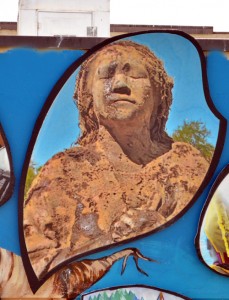 http://www.lasmadresproject.org/ (link not currently working.  For more info use one below)

“I am compelled as an artist and more importantly as a resident of our borderlands, to make visible the hidden narratives that are unfolding todos los dias, every day in our backyard.”

The sculptural installation¡±The Mothers; Las Madres¡± standing vigil is an artist¡¯s response to the human suffering and ongoing death of migrants coming across the Mexican/American border in search of work in El Norte. Each Mother figure represents over 1000 men, women and children who have lost their lives crossing the desert. The sculptures are made from discarded migrant clothing reclaimed from the desert and then blended with Sonoran plant material. The sculpture’s distressed surfaces speak to the physical and psychological experience of the arduous journey and its effect on the people. The organic nature of the materials used to sculpt The Mothers; Las Madres also reflects the impact of this historical migration on the fragile surface of the desert environment itself.

Until Las Madres was installed, there was no Memorial in the area to the estimated 3000+ people who have died crossing the desert in the last decade, no public altar to visit to pay our respects, no way to acknowledge thousands of people who have no voice. As artists, we hope that ¡°Las Madres, No Mas Lagrimas¡± Project can address this need and help fill the void.

Countless mothers wait behind, praying ceaselessly for safe passage for their husbands, sons & daughters as they make their perilous trek through the desert, mothers who know that many of their children won¡¯t make it and will literally die trying. The Mothers; Las Madres also calls to our attention to the growing wave of undocumented female immigrants traversing the Mexican border into the United States, an untold number of mujeres many of whom are madres crossing the desert with families in tow. Embracing them is the divine feminine spirit of the earth itself that gathers the prayers of the sick and dying and bears the endless tears of these Mothers.

The Mothers; Las Madres takes the issue of immigration out of the realm of politics and brings it back into the heart, reminding us of our common humanity, that we are all familia with shared concerns. Seen enmasse, The Mothers; Las Madres have a powerful impact on the viewer. The Mother figures personify the wrenching exodus of the people from their native lands, and the archetypal quest for a better life for one¡¯s family.

Inspired in large part by the growing amount of clothing and other personal items belonging to men, women and children left behind in the desert,  “Every thread that embodies the figure(s) came from jeans the artist and colleagues have collected primarily from washes in desert lands between Amado and Arivaca – the same jeans that migrants have left behind. “ Tucson Citizen, 9/05, the Mothers Project was conceived in August 2004 and installed on campus in November 2005.

Las Madres is part of Pima Community College¡¯s award winning Sculpture on Campus Program and has been extended through 2008. The public is welcome to visit Las Madres at Pima Community college¡¯s main (east side) campus at 8181 East Irvington Road (east of Pantano) in Tucson.