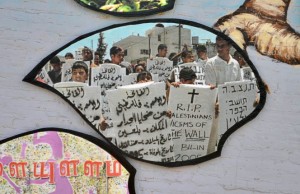 Bil’in is a Palestinian village that is struggling to exist. It is fighting to safeguard its land, its olive trees, its resources… its liberty.

“Bil’in Habibti” is a documentary by Shai Pollack that documents Bi’lin’s nonviolent struggle against the Israeli occupation and the building of the wall which has cost the village much land, resources and lives.

BUSBOYS AND POETS in Washington, DC hosted a March 6 screening of “Bil’in Habibti” (“Bil’in, My Love”), a full-length documentary about the nonviolent struggle in the West Bank village of Bil’in against construction of the Israeli separation wall. The event was sponsored by Interfaith Peace-Builders, Nonviolence International and the American University Council on Middle East Studies.

“One thing we tend not to hear about is the widespread efforts of nonviolent resistance in Palestine,” noted American University Professor Joseph Groves. “There’s a question I commonly hear, and that is ‘Where is the Palestinian Gandhi?’ My response? They’re everywhere. Two of them are here tonight.”

Groves introduced Shai Pollack, the film’s Israeli writer and director, and Mansour Mansour, a Palestinian who came to Bil’in as a nonviolence coordinator and trainer, as “an Israeli and a Palestinian Gandhi.” Briefly explaining the film, Mansour said, “This is how we live and how we practice our normal lives, but the core of the movie talks about the nonviolent resistance in Bil’in.”

The film opens in early 2005 to the scream of a chainsaw as Israeli Defense Forces (IDF) soldiers cut the branches of olive trees. The owner of the grove, a Palestinian man later identified as Wagee, rushes over, shouting, “Why? Why the olive trees?” The trees have been in his family for literally hundreds of years and remain one of the few sources of income left for his family. The IDF soldiers ignore Wagee’s cries and forcibly contain him and his family inside their home, where they watch through the iron bars of their windows as their orchard is destroyed.

This destruction was declared necessary by the IDF to make space for the West Bank separation wall. Bil’in is located four kilometers (2.4 miles) east of the 1967 internationally recognized border between Israel and Palestine. According to “Bil’in Habibti,” however, even though “the International Court in The Hague declared the barrier route illegal, the government goes on building, claiming the route is only temporary and when peace comes the barrier will be removed. In fact the government fills the annexed area with new settlements and creates an irreversible situation.”

About half of Bil’in’s land was lost in this “security” land grab, after which Israeli developers immediately began constructing government-subsidized high-rise apartments in a new neighborhood of the West Bank settlement called Mattiyahu East. The village of Bil’in fell victim to a confluence of economic, political, strategic and religious goals.

And so the men, women and children of Bil’in organized. The Bil’in Popular Committee Against the Wall directed the grassroots resistance that held weekly peaceful protests against the wall’s construction. Pollack, a member of several Israeli activist groups, was an ever-present figure, camera in hand, tracking the development of the nonviolent protests.

His film presents the people of Bil’in as thoughtful and passionate objectors to the new wall and the arbitrary punishments inflicted by the IDF. Side by side with Israeli and international activists, the people of Bil’in used creative tactics of civil disobedience by crossing the arbitrary “no pass zones,” attempting to dismantle the illegal barrier, chaining themselves to trees to stop the bulldozers, and even erecting their own fence.

The protests invariably were met with harsh tactics: tear gas, rubber bullets, sound bombs, beatings and arrests. In a nonviolent campaign, however, such a response is expected. Explained one young protester from Bil’in, “You aim to get hit so the whole world will see you are hit. When it is your nonviolence against their violence, you win.”

The protests gained national and international media attention. Bil’in was even featured in an Israeli Channel 1 news report that was critical of the IDF’s handling of the situation and the emerging details about the suspicious real estate development in the neighboring Israeli settlement.

After a year of protests, “Bil’in Habibti” ends with no resolution. Even as the campaign goes on, the wall is almost complete, the village’s legal case is tied up in Israeli courts and there is no guarantee that the struggle of the villagers of Bil’in will afford them any justice or measure of peace.

Following the film Pollack described the post-film developments. In a hard-fought legal battle, the Israeli Supreme Court ruled the separation wall was unnecessary for security reasons and the route must move one kilometer to the west, returning half of Bil’in’s confiscated lands. However, even though the real estate developments in Mattiyahu East were found to be constructed without building permits from the Israeli government, they were allowed to stand because settlers were already occupying some of the buildings.

It has been a painful, long-term campaign to reclaim half of what had been stolen, Pollack said. And yet, compared to the tens of villages enduring the same struggles which rarely receive coverage in the media, he noted, the events of Bil’in are a success. The community has pledged to continue the campaign, but for now the taste of success is bittersweet—for in Palestine, even victory comes with loss.