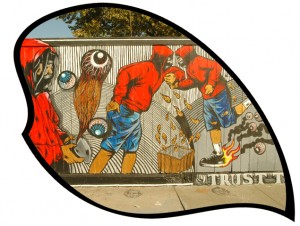 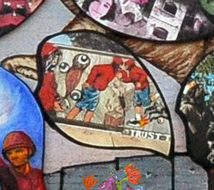 The catalogue Sama-sama/Together An International Exchange Project between Yogyakarta-San Francisco is currently available at Intersection for the Arts!! Catalogues are $30/each and all proceeds are going towards earthquake relief for the earthquake that hit Yogyakarta in May 2006 — there are still many people who are needing help with the rebuilding of their homes!!

From catalogue essay by Wilson:
Sama-sama/Together is an international collaboration and exchange project between community arts organizations and artists from San Francisco, California and Yogyakarta, Indonesia. This project, co-sponsored by the Clarion Alley Mural Project (CAMP) and Intersection for the Arts, will feature the first murals to be created in San Francisco by Indonesian artists and the first major exhibition in the Bay Area to feature contemporary alternative work from Indonesia. Designed to foster understanding of contemporary art and culture between the two communities through the creation of new works, as well as through cross-cultural dialogue between participating artists and the public at large, this collaboration is especially timely given the great need for understanding and dialogue between Muslim and non-Muslim countries (Indonesia is the largest Muslim country in the world). Sama-sama/Together launched in July and August, 2003 as six Bay Area artists from the artists’ collective CAMP (Carolyn Castaño, Carolyn Ryder Cooley, Alicia McCarthy, Aaron Noble, Andrew J. Schoultz, Megan Wilson) traveled to Indonesia, and then in September and October, 2003 as four Yogyakarta artists from the artists’ collective Apotik Komik (Arie Dyanto, Samuel Indratma, Arya Panjalu, Nano Warsono) travel to the Bay Area. All of the participating artists in Sama-sama/Togehter work within similar aesthetics and methodologies – producing work influenced by comics and visual imagery found in the public sphere such as graffiti, advertising, and design. Whether individual artworks, large murals or public art projects, each of the artists individually and collectively make work responding to immediate social and political conditions. Sama-sama/Together provides the opportunity to learn how each culture has influenced and responded to the artwork being created – an experimental exchange that will generate fertile, cross-cultural dialogue amongst the communities of the Pacific Rim. The project encompasses the creation of public works (murals, performances, and installations), joint gallery exhibitions in each location, artists’ talks, and an evening of film/video presentations from each community. In San Francisco, all of the artists will present a gallery exhibition at Intersection (September 10 – October 25, 2003), and the Apotik Komik collective will create new public murals on Clarion Alley, outside of Southern Exposure, on LeBeau Nob Hill Market, Rainbow Grocery, and Sycamore Street, participate in an auction at Intersection, and visit classrooms at Bay Area schools. In addition, a catalogue will be produced to accompany the project.

APOTIK KOMIK is an artists’ collective based in Yogyakarta, Indonesia. Currently, Yogyakarta does not have an established public art program due to the socio-political climate that existed during the Suharto administration. However, as life has slowly been changing over the past five years, so too has the ability and desire to create public art. They work in public spaces such as empty walls and billboards – alternative spaces outside of the established gallery system. Working with humor and subversion, their work comments on the socio-political conditions of Indonesia. They often use cardboard and house paints, as traditional materials such as canvas and acrylic paints are prohibitively expensive. They also make comic books. Although Apotik Komik started in 1992, they became widely known in 1997 with a show that member Samuel Indratma organized called Apotik Komik that received a great deal of attention from the art community and the media. The overwhelmingly positive support reflected the needed voice that Apotik Komik has provided in Yogyakarta’s arts and greater community.

CLARION ALLEY MURAL PROJECT (CAMP) was established in October 1992 by a volunteer collective of six Mission residents: Aaron Noble, Michael O’Connor, Sebastiana Pastor, Rigo 92, Mary Gail Snyder, and Aracely Soriano. CAMP was directly inspired by the mural cluster in Balmy Alley focused on Central American social struggles. CAMP did not choose a single theme, however, instead focusing on the two goals of social inclusiveness and aesthetic variety. As a result CAMP has produced more than 100 murals on and around Clarion Alley by artists of all ages and all levels of experience, with an emphasis on emerging artists and new styles. Clarion Alley was a key site for the development of the aesthetic that has become known as the Mission School. Many of the artists who CAMP has worked with in the past decade have gone on to become highly regarded locally, nationally, and internationally, including Chuy Jesús Campusano; GIANT; Susan Greene; Maya Hayuk; Heart 101; Cliff Hengst; Marisa Hernandez; Scott Hewicker; Xylor Jane; Chris Johansen; Barry McGee; Ruby Neri; Sirron Norris; Isis Rodriguez; Scott Williams.

INTERSECTION FOR THE ARTS is San Francisco’s oldest alternative art space – turning 38 in June 2003 – and has a long history of presenting new, experimental work in the fields of literature, theater, music, and the visual arts and also in supporting the Bay Area’s cultural community through service, technical support, and mentorship programs. Overall we are a rare organization. We do not have an artistic director because we believe that we can only continue to be a current, relevant, and strong community-based art space if we cultivate not one person’s vision but the vision of all the people who make an investment in the organization. Our mission is vested in the notion that art can provide powerful opportunities for people to exchange ideas and perspectives, encourage us to respond more critically to the world – to begin to reach for a future that is more hopeful, more inclusive, and more tolerant. We currently support and present work in six different program fields: Visual Arts, Literary (the oldest independent reading series in California), Theater, Jazz, Hybrid Project, and Fiscal Sponsorship to over 100 Bay Area artists.