ORSMP and Break the Silence Mural and Art Project partnered with MECA, Estria Foundation's Water Writes Project and Afaq Jadeeda (New Horizons) to paint murals collaborative murals at the water filters that MECA has installed to provide clean and safe drinking water in Gaza with the MAIA Project.

The MAIA Mural Brigade is the fifth in the ESTRIA Foundation's Water Writes Project, a series of 10 mural in 10 cities around the world to raise awareness about environmental justice and the issue of water and to organize across boundaries and nations.

Besieged Waters, from Sjabary, on the water situation in Gaza. 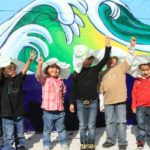 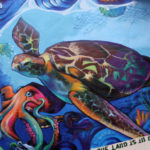 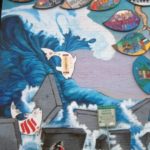 The Wave references the importance of water in both cities of Olympia WA and Rafah Palestine. The fishing industry, one of the only sources of income for Palestinians in Gaza is constantly under attack from Israel.

The Fishing Sector in the Gaza Strip

Since mid-2009, increasing numbers of fishermen and other workers have begun working in the fishing sector in the Gaza Strip. This increase is a result of the high unemployment levels among Palestinian workers who were previously employed in other economic sectors that suffered significant deterioration. Hundreds of workers and fishermen who abandoned the fishing industry in the past because of the Israeli attacks along the shore in the Gaza Strip resumed their work in the fishing industry.

Since the beginning of this 2010, the number of fishermen in Gaza has increased from 3,403 to 3,700. They are distributed among the different areas of the Gaza Strip as follows: 200 fishermen in the northern Gaza Strip; 1,900 in Gaza City; 500 in the central Gaza Strip; 700 in Khan Yunis; and 400 in Rafah.The number of fish traders and amateurs who fish irregularly has also increased - from approximately 1,054 in 2009 to approximately 2,000 in May 2010. This number is distributed among the various areas of the Gaza Strip.

This increase in the number of fishermen and workers in the fishing sector is reflected on fishing equipment ownerd by Gaza's fishermen. The total number of fishing boats has increased from 975 boats of various sizes to 1,249 boats, distributed among the different areas of the Gaza Strip as follows:

Table I: Number of Fishermen and Fishing Tols, May 2010

At approximately 09:30 on 25 March 2010, IOF gunboats opened fire at Palestinian fishing boats that were sailing approximately 800 meters off the northern shore of the Gaza Strip, opposite tthe al-Waha resort in the northwest of Beit Lahia town. Hazem Ahmed Juma'a al-Qur'an, 27, from the central Gaza Strip town of Deir al-Balah, was wounded by shrapnel to the head. Al-Qur'an was wounded while on his boat, which was heavily damaged due to the heavy shooting. At approximately 09:55, al-Qur'an arrived at Kamal 'Edwan Hospital in Beit Lahia. Medical sources at the Hospital described his condition as moderate to serious. At approximately 10:45, he was transferred to Shifa hospital for additional medical treatment.

Jamil al-Aqra'a, a fisherman who was at the scene at the time of the incident, told PCHR:

"The gunboats opened fire at Palestinian fishing boats directly. Al-Qur'an, who was on his boat with another two fishermen, was wounded in the head as a result. They left their fishing nets in the water and rushed to rescue him."

On 21 April 2010, IOF gunboats opened fire at Palestinian fishing boats off the Rafah shore. Yousef Husam al-Habbash, 15, was wounded in the right hand as a result.

3.7 minutes of a documentary of the first BTS murals in 1989, produced and directed by Susan Greene