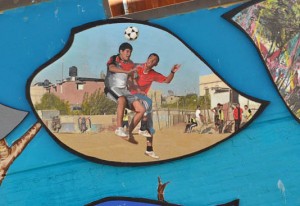 You’re watching your kid play soccer. It’s a chilly weekend morning and you may be upset at the lost sleep involved in getting up and getting him there. The grass is green and the net, goal posts, striping are new and unscarred from previous play; their maintenance secured through a school district budget that generally passes grudging voter approval every two years. You see the mix of parents, some of them groggy, some of them slightly too excited by the impending competition. And it’s all incredibly normal.

What if the infrastructure for everything in the above scenario simply didn’t exist? What if there wasn’t a dew-covered green field behind the local elementary school that was open to all for community activities, funded by tax payers and maintained by salaried groundskeepers? What would it take for that scene to play out in in a refugee community in the Southern border town of Rafah, Gaza?

Avid soccer fans pose for photo during a game in Gaza. (John Harvey)

Every year, community members in the Yebna neighborhood of Rafah find out. Amid the ongoing brutal siege and blockade conducted by the Israeli occupation forces and the often violent struggle between internal political factions comes the third annual Ramadan Soccer Tournament, organised by the Rachel Corrie Sports Initiative in Rafah.

It isn’t easy. People in this community are still reeling from a savage December 2008 military assault. They are part of a captive population of 1.5 million people who face a grim and grinding daily fight to prevent social collapse and cultural extinction. The soccer pitch is not grass. It’s on packed, dry, tan earth. The temperatures can be somewhat hotter than what some of the soccer parents you know might be comfortable with. And matches can potentially be called off on account of curfews or air attack as opposed to foul weather. Throwing a soccer tournament in the midst of these conditions becomes itself an act of resistance against forces both from the outside and inside that work to divide and crush. The demand for some amount of normalcy itself becomes revolutionary.

“Our playground, called the ‘Unity Youth’ playground, is not the only one in the area,” says Adnan Abu Sa’ud, co-founder of the Rachel Corrie Sports Initiative. “But what makes it distinct other than its location [near the Egyptian border where Israeli bulldozers had flattened neighborhoods of homes and effectively tried to maintain as a no-man’s land] is that young people from different political colors come almost every day not to talk about politics but to practice sport with each other. Other playgrounds attract only those who are affiliated to a certain political line. As a matter of fact the daily activities as well as the annual tournament manifests a social and sportsmanship bond, so to speak, amongst the people of our community.”

Each year, a vital international community raises funds to keep the Ramadan Soccer Tournament going and to make the soccer field available year-round. From London’s Friends of Yibna sister-city project to  the Rachel Corrie Foundation in the US to neighborhood soccer clubs and individual donors around the world, supporters are reaching out to make the tournament a reality.

The Rachel Corrie Foundation, a 501(c)3 charitable organization, acts as the sponsor through which donations can be sent either online or by mail, and the money raised to fund the tournament is spent in Gaza with the oversight of a Patriot Act–approved NGO, the Union of Health Work Committees.

Tournament and sports initiative co-founders Khaled Nasrallah and Adan Abu Al Sa’ud chose to name the event after their friend Rachel Corrie, the Olympia human rights activist with the International Solidarity Movement who was killed by an Israeli bulldozer in Rafah in 2003. “Rachel came among us and joined us in our struggle for justice as Palestinians,” Khaled said. “She did not think in terms of this faction or that faction. In the spirit of Rachel Corrie we hope to provide more than an event, but also a place for all the people of Rafah, regardless of faction. This tournament will provide a place for all community members–especially the heavily affected youth population in Rafah–to participate as Palestinians. It is truly a place to re-establish community.”

The culture of resistance in Palestine is what can make even the ordinary revolutionary. In Gaza no matter the destruction visited upon them, the people continue to survive and rebuild to the best of their abilities. Fortunately, this ordinary soccer tournament provides an extraordinary way for us outside Gaza to help.

To find out more about the Rachel Corrie Ramadan Soccer Tournament, visit www.gazalife.org.