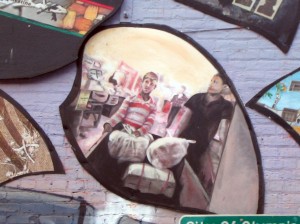 Project Souarna is a photography program designed to foster youth leadership and creativity. We conduct workshops for displaced youth living in and near al Wehdat refugee camp in Amman, Jordan.

The U.S. media continually portrays Arabs in the Middle East through one lens; therefore Project Souarna was founded to provide a different lens, one through the eye of a child in the region. Project Souarna focuses on photography because it is a tool that can be employed as a technical skill as well as an opportunity to draw attention to often neglected voices.

Project Souarna began in December 2008 by Aisha Mershani, who wanted to share her skills as a photographer. Through the months the Project Team was assembled, photographer Iman al Dabbagh, artist Susu Attar, educator Mark Gonzalez, photographer April Banks, and the graphic designer Sarah Fakhouri. The Project works on a team mentality, all work equally to share their skills and make the Project the best it can be.

Jordan was chosen as the location due to it hosting the largest refugee population in the Middle East. A large number of the refugee populations are children. Many children attend the facilities of Relief International, housed in various camps around Amman.

The purpose of Project Souarna is to provide refugee youth living in and near al Wehdat refugee camp in Amman, Jordan the opportunity to expand their creative and journalistic skills by way of photography. By teaching photography to youth we are able to catch a glimpse of their reality, create a space for the youth to independently express themselves, and develop an employable skill among youth as a means of economic empowerment.

The structure of the workshop is sculpted in the spirit of leadership training programs. The purpose of the curriculum is to teach future teachers (students in the workshops), equipping the youth with the tools to continue the program after the end of their training. Our curriculum is built to foster individual creativity and leadership. We seek to encourage youth participation in the organizational process, further influencing their leadership capabilities.

At the end of the project, students in the current course will have the opportunity to carry on the project in the future at the Relief International facilities. RI has agreed to continue to open the space and house the equipment, allowing it to remain accessible to the youth after the workshop. This ensures the momentum from the workshop will not be lost, as access to the materials will remain in the participants’ reach.

Phase 1: Project Souarna began on July 20, 2009. For one month, students participated in an intensive photography course led by professional international photographers and artists. At the end of the workshop on August 12th, the students had their opening for their group photography exhibition at Darat al Tasweer Gallery, the exhibition will stay up until Sept. 12th, 2009. The photos are also exhibited at the Al-Wehdat Sports Club from August 13th, 2009- September 2nd, 2009.

Phase 2: September 2nd will begin the next phase of the Project; instructors will already have left their students to capture their lives and create a narrative to share with the world. During this time four local photographers will assist in guiding the students in their photographic needs. Students will meet weekly with the volunteer photographers to assist in their process.

Phase 3: December 2009 the photographers will reunite with the students in Amman to conduct another class. The winter course will focus on post processing. The independent work of the students will be chosen and exhibited in Amman.

Phase 4: After the initial launch exhibition in Amman, the exhibit will travel to various cities throughout the U.S. and Europe.