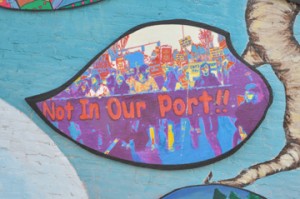 In four years of the war in Iraq, over 2,500 US soldiers and over 150,000 Iraqis have died. Hundreds of billions of dollars later, our troops are still fighting in Iraq. The declared mission has been proven false and now civil war rages on. This is an illegal war founded on lies told by the Bush administration and sustained by Congressional acquiescence, Republican and Democrat alike.
The discrepancy between public opinion and US policy both locally and nationally is evidence of a failure of representation in our electoral democracy. Nationally, numerous polls demonstrate diminishing support for the war. Locally, since the military shipments through Olympia’s port began in 2004, the community has fully employed a broad spectrum of democracy’s tools – including letter-writing and petitioning public officials in open forums – to oppose the occupation of Iraq and the Port of Olympia profiting from it in any way. In large numbers, we have asked the Port Commissioners to withdraw support for the war and stop shipments to Iraq. Yet, just as the war, the killing, and corporate war-profiteering continue, so do the military shipments through Olympia .
The port is a public institution, yet, to date, there has been no meaningful democratic process for deciding what type of commerce is acceptable to residents and taxpayers.
The weapons shipments, and the use of our public property to prolong and supply the war in Iraq have made us complicit in crimes against humanity. We refuse to be complicit any longer. We will continue to utilize every available instrument of democracy, including direct action and disruption when necessary. We are working to stop the war machine by standing in front of the machines of war as they attempt to enter our port.
Just as soldiers have a responsibility to disobey unlawful orders, we have a responsibility to refuse to cooperate with the American Empire.
Nobody should have to join the military in order to have a job or have health care; there should be more opportunities for our youth, poor, and people of color. We support the troops as human beings with families to feed and obligations to fulfill. We do not support their actions in support of empire.
We have engaged in all traditional measures to affect policy regarding the invasion and occupation of Iraq and must continue to work, through a variety of tactics, to influence change so that the public port reflects the values of our community.
We stand for a peoples’ democracy and against empire. We hope to be an inspiration to other communities and we ask for their solidarity and to reject the militarization of our American society. We call for action and an end the militarization of our port!