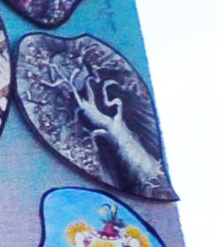 The Cheap Art movement was launched in 1982 by the Bread and Puppet Theater in direct response to the business of art and its growing appropriation by the corporate sector.

Cheap Art hopes to reestablish the appreciation of artistic creation by making it available to a wider audience and inspire anyone to revel in an art making process that is not subject to academic approval or curatorial acceptance.

Why? “Because art is food…”, reads the Why Cheap Art manifesto. Cheap Art ranges in price from 5 cents to 50 dollars. Anyone can participate!

Note: This paper was written for a graduate course in puppetry history and theory, co-taught by Bradford Clark.

Peter Schumann views theatre, and all forms of art, as absolutely essential. In 1968, he described theatre (in its ideal form) this way: “Theatre is . . . like bread . . . like a necessity. Theatre is a form of religion. It is fun” (“Bread” 35). Answering an interviewer in New Theatre Quarterly in the 1980s, Schumann was less optimistic about art in our contemporary democratic society. Concerning a trip to Central America, and the excitement and vitality of the work there, Schumann was asked if he thought Bread and Puppet, or any other committed artistic group, could come to have the same kind of significance here in the United States. Answered Schumann:

Peter Schumann has not given up on the possibility of vitality and growth from art, even in this country, however. In the early 1990s, he wrote about the possibilities and challenges of the puppet theatre for a Russian audience, noting that the ideas were not bound by culture. He cites five aspects of puppet theatre which give it life but also cause it to be questioned by the status quo. First, he says, puppetry is free of any kind of seriousness or respect for human constructs of authority or responsibility. It is possible to poke fun at all kinds of targets with a puppet where a live performer might be less accepted. On one level, we simply expect puppets to make us laugh, and often they do. On another, they offer social criticism and hopefully cause the audience to think about the questions they raise.

The next shift or unique element in the puppet theatre as Schumann sees it is an emphasis on action over dialogue; a redefinition of language to include more than just written or spoken words. Puppets must communicate primarily through gesture, even when they are given voices and texts to read. When they do speak, Schumann says, it is not in conventional forms, but in slurs and stutters. Similarly, naturalistic acting style is by no means appropriate for puppet performance. The acting of puppets must be unpredictable, and also unpretentious. Motivations are simple and straightforward, and there is little complexity. On the other hand, the fact that their actions cannot be limited or pinned down quite so easily as can those of human actors, makes puppet “actors” more complex to some audiences.

Puppet theatre is also important because of what it borrows from other disciplines. In Schumann’s theatre, music exists only as music. In the commercial theatre and films, music is used to underscore an action or a visual scene, and is hardly ever utilized on its own merit. Schumann uses all sorts of found instruments and found objects from life in producing the sounds which are common to all of us. The sound ideas do not have to be directly related to a particular visual, but can stand alone as one kind of artistic expression. Along with music, Schumann’s theatre incorporates his own knowledge of and experience in sculpture. He describes his own “puppets” as “socially embedded sculptures” which are most important and easy to understand in the context where they were created. Once again, Schumann’s aesthetic is anti-elitist, and he wants to see sculptures which represent concepts or ideas of simple common sense rather than complex art forms with limiting rules.

These ideas sound much more like the idealistic Schumann of the 1960s. His own aesthetic/artistic/religious ideals are in fact a kind of mixed bag, however. Though he recognizes the problems, he hopes for change. He comments to this effect in the early 1970s: “I think a good man is both a man who is able to be good in detail and a man who wants to learn at least to fly, or to solve all the problems of the world, or to arrange for the second coming” (Taylor 262).

Schumann’s puppet productions, centered around a farm in Vermont and/or New York City, have done a little bit of each since the 1960s. The annual Domestic Resurrection Circus incorporates political satire, dancing, music, a parade, and the all-important sideshows, put on by the volunteers as expressions of their own which are somewhat independent of the group project.

There is a definite challenge in dealing with Peter Schumann simply through descriptions of his work or video recordings. After awhile the lengthy descriptions of the action, even when accompanied by numbers of still photographs, come to emphasize the fact that these are simply plans for action to be elaborated and developed in performance. However, there do seem to be common features.

The first element which appears to be almost universally present in Schumann’s work, particularly that which takes place in large rooms (like churches) or outside, is some kind of huge rod puppet to represent the main character. Whether that character is Jesus with his large hands in some kind of gesture of blessing, or Uncle Fatso, or some other puppet, there is usually at least one puppet which is greater than human-size. These puppets are operated by means of at least one long pole which supports the head, made of either Celastic or papier machi, and a variety of methods for the arms. Usually the arms are controlled independently of each other and the head, either by means of additional rods or direct human manipulation. Often the “arms” themselves are simply draped cloth hanging from the “shoulder” of the head to the hand, supported either by a rod or a performer.

At different periods in his career, Schumann has made more or less use of the individual human performer, but in most cases this performer is “neutralized” by the use of a mask. Again, these are oversized full head pieces, which the actors wear and manipulate as part of themselves. On occasion they may have large hands to accompany the large head.

These puppets remain abstractions. In this way, Schumann finds that they reach a kind of universality in their diversity of interpretation. They find diversity in their practical application as well. Because the puppets are not limited to one very specific character, they can be used over and over again. Schumann’s theatre is really more about characters than it is about telling a complicated story anyway, and the reuse of these identifiable (but flexible) characters adds dimensions to their character. Four examples are offered below.

The first example is the Christ figure. Of course this character comes into play over and over again, particularly in the performances the group puts on at Christmas and Easter each year in churches in New York. In the case of Jesus, it is not so much that this same puppet is used in other productions to add the Messianic resonance, but rather that different kinds of Jesus puppets are used each year to fit in with the particular retelling and political slant of the production.

Uncle Fatso is another important character, who has been used in Schumann productions for years. With his big head and business suit (often performed by a live actor wearing a full- head mask) Uncle Fatso represents the United States and Western capitalism in its greediest form. Robert Hamilton notes in his dissertation that this puppet can be used to represent “the evil landlord, the businessman, President Nixon, President Johnson, and a giant” (373).

Characters in the Bread and Puppet Theatre do not have to be human, either. A bomber becomes a prominent image in several pieces by Schumann at various points in his career, reflecting his own experience of fleeing Nazi Germany with his family in the 1930s, as well as the many bombings of innocent women and children all over the world since then. This airplane may be represented by anything from a huge plane which effects the Crucifixion in “The Cry of the People for Meat” to tiny toys which still suggest the great amount of destruction effected by one little plane and its cargo.

The plane image figures strongly in scenes with the “Gray Ladies,” characters invented early on by Schumann and used over and over again in different contexts. Hamilton groups them with the “idea masks and idea puppets” which are not particularly specific. These women may represent peasants in Central America, the mothers of soldiers in W.W.II, (or any other war), in general the oppressed by society.

Peter Schumann is a fascinating character himself. His wide interests and his dedication to his art give him a strong basis for his often politically-oriented performances. He has made use of a variety of materials and types of puppets over the course of his career. His history in the United States has lasted over 30 years, during which time he has made repeated use of a number of images and characters. Like Schumann himself, however, the puppets continue to change.

His own sense of change is illustrated in his repeated trips abroad, to people who are in need of something to hold onto. These people may be Soviet citizens trying to learn how to live in a republic, Nicaraguan Catholics in tiny village, or any other of a number of places he has visited or taken time to teach (at least briefly). This element of Schumann’s biography is somewhat troubling, because it raises all of the questions about American society which we do not want to face. Why, for example, should Schumann have to go abroad to find people who “need” art? The fact that he continually does suggests to me that he retains hope for the world but has given up on the United States. Even this is probably an over-simplification, for Schumann writes in the February 1994 TDR that he, who has always favored pacifism, is now willing (after seeing Sarajevo first hand) to see the United States send in bombers to save the city. This position is particularly interesting given the bombing sorties of this past week (August 28- September 1, 1995).

The complexities of Peter Schumann and his work can only be suggested in a paper of this length. The production descriptions are important starting places for learning about his career, but there appears to be no substitute for spending the summer at the farm in Vermont, or traveling around the world with his company, and learning by doing.

Brecht, Stefan. The Bread and Puppet Theatre. 2v. The original theatre of the City of New York from the mid-sixties to the mid-seventies 4. London: Methuen, 1988.