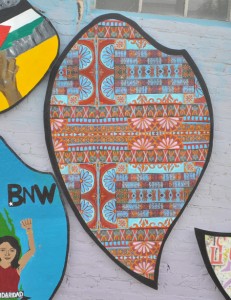 After she left her career as an interior designer, Nouha Sinno set off on a journey of self-discovery that began with a desire for free expression, unrestricted by any boundaries. She had always been taken by the enchanting concept of Arabic language as art, and as a result her work is a reflection of her years contemplating the visual beauty of Arabic culture, from Islamic tiles and geometry to architectural motifs and calligraphy. Her art pays tribute to her love for the language. “I am grateful,” she says, “for the rich legacy of beauty and elegance that is the Arabic alphabet.” This collection of her work is reveals intricate lines and colors that coalesce into abstract rendition of Arabic words and their meaning. Her rich compositions speak of her memories as an Arab Muslim woman, born and raised in Beirut, Lebanon, where she graduated from the Lebanese University of Fine Art as an interior designer. She worked as such in her country before she moved to Southern California in 1984, escaping the civil war there. Nouha Sinno has participated in several group shows in Beirut, Bahrain, Seattle and Los Angeles.