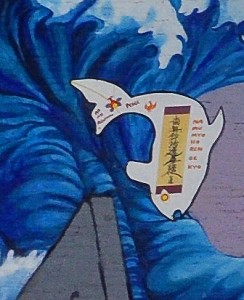 INTRODUCTION TO NIPPONZAN MYOHOJI
Nipponzan Myohoji was founded by the Most Venerable Nichidatsu Fujii, known as “Fujii Guruji”. He was born on August 6, 1885 in Japan, and was ordained a Buddhist monk of the Nichiren sect when he was seventeen years old. Until the age of thirty-one years, Fujii Guruji entered into authentic study and practice not only in the Nichiren school, but also in all the major schools of Buddhism.

In the late autumn of 1916, Fujii Guruji undertook the self-imposed austerity of fasting under the waterfall of Momo-o-no-taki in Nara prefecture. Out of this practice, he attained the supreme resolve that the principle of his lifetime practice was to chant Na Mu Myo Ho Ren Ge Kyo, while beating prayer drum and walking. Early in the following year, 1917, he went to Tokyo and began this practice in front of the Imperial Palace, following the traditional footpath of dissemination as a disciple of the thirteenth century Great Saint Nichiren.

The first temple opened by Fujii Guruji was in Northern China, in 1918. In 1923, after the Great Kanto Earthquake shook Japan, he returned to pray to bring true security to the nation by raising the righteous teachings of the Buddha. His temples began to be built in Japan.

In 1930, he left for India and devoted himself in fervent prayer to revive Buddhism in the land of Lord Buddha’s birth. In 1933, Fujii Guruji met Mahatma Gandhi, the founding father of India. Deep spiritual ties developed as Fujii Guruji unreservedly offered spiritual practice in support of the non-violent liberation of India. He returned to Japan in 1938. During World War II, he tried to build Peace Pagodas in which the holy relics of Buddha would be enshrined. He also invited the generals of Japan to join in this Buddha work, with the hope to convert Japan away from war, as a Buddhist country.

Since the nuclear holocaust of Hiroshima and Nagasaki, Guruji made it his life’s mission to work for abolition of nuclear arms. As an advocate of peace, he tirelessly acted for world peace and built Peace Pagodas to embody the universal spirit of peace which innately exists in the depths of the mind of all peoples. Recognizing his contribution to this end, India conferred upon him the prestigious Jawaharlal Nehru Award for International Understanding in 1978. He passed away on January 9, 1986 at the age of 100.

NA MU MYO HO REN GE KYO
Chanting Na Mu Myo Ho Ren Ge Kyo is the essential practice of Nipponzan Myohoji, as well as most other sects of the Nichiren school of Buddhism. The Nichiren school was founded on the teachings of the Great Bodhisattva Nichiren, a Buddhist Monk of thirteenth century Japan. The wars, famines and other natural catastrophes of his time compelled St. Nichiren to search entire collections of Buddhist sutras to know the true will and guidance of the Buddha, to alleviate the severe sufferings of the people. His years of study led him to conclude that the Lotus Sutra unified all other sutras, and expounded the ultimate truth, the source to bring relief to all sentient beings, especially in the distress of the modern era.

The “great stream of relief” flows when we chant Na Mu Myo Ho Ren Ge Kyo, which is the heart and mind of the Lotus Sutra, wherein Lord Buddha revealed his true original nature. This original nature is the Eternally Enlightened Buddha, beyond time, Perfect Wisdom, Consciousness, Universal Compassion, Ultimate Truth. Thus, the chanting of Na Mu Myo Ho Ren Ge Kyo is identical to calling out the Eternally Enlightened Buddha in all directions. St. Nichiren wrote in his Kanjin Honzon Sho: “Sakyamuni Buddha’s merit of practicing the Bodhisattva way (dedicating one’s life selflessly for the salvation of others) leading to Buddhahood, as well as that of preaching and saving all living beings since His attainment of Buddhahood, are altogether contained in the five words of Myo, Ho, Ren, Ge, Kyo, and consequently when we uphold the five words, the merits which He accumulated before and after His attainment of Buddhahood are spontaneously transferred to us all.

The single practice of chanting Na Mu Myo Ho Ren Ge Kyo integrates the dual needs of spiritual dedication for peace within and without. It is the most needed spiritual practice of our time both to establish genuine peace in the world and to awaken true security within our heart and mind.

“Civilization is neither having electric lights, nor manufacturing atomic bombs. It is not to kill human beings, not to destroy things, not to wage a war; it is to become mutually amiable and respectful. What constitutes its foundation is not the establishment of a judicial system but religious faith that seeks gentleness, peace, simplicity and uprightness.” Most Venerable Nichidatsu Fujii.

http://en.wikipedia.org/wiki/Nipponzan-My%C5%8Dh%C5%8Dji
From Wikipedia
Nipponzan Myōhōji (日本山妙法寺), founded in 1917 by Nichidatsu Fujii, is a new religious movement that emerged from the Nichiren sect of Japanese Buddhism.[1]

The community reveres the Lotus-Sūtra (jp: 法華経 Hokkekyō) as the highest expression of the Buddhist message. In addition, it is actively engaged worldwide in the peace movement

The Lotus Sutra presents itself as a discourse delivered by the Buddha toward the end of his life. The tradition in Mahayana states that the sutra was written down at the time of the Buddha and stored for five hundred years in a realm of nāgas. After this they were reintroduced into the human realm at the time of the Fourth Buddhist Council in Kashmir. The sutra’s teachings purport to be of a higher order than those contained in the āgamas of the Sūtra Piṭaka, and that humanity had been unable to understand the sutra at the time of the Buddha, and thus the teaching had to be held back.

Nipponzan Myōhōji is known in the west for its Peace Pagodas (Stupas) in many locations around the world. It has also been known for many high profile peace pilgrimages undertaken by its followers. One of the most prominent of these was the 1994-1995 pilgrimage from Auschwitz to Hiroshima by way of Bosnia, Iraq, Cambodia and other countries then experiencing the effects of war. That pilgrimage was known as The Interfaith Pilgrimage for Peace and Life.