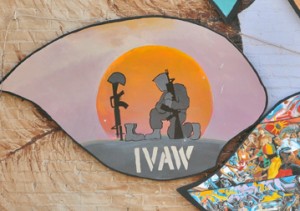 About Iraq Veterans Against the War

Iraq Veterans Against the War (IVAW) was founded by Iraq war veterans in July 2004 at the annual convention of Veterans for Peace (VFP) in Boston to give a voice to the large number of active duty service people and veterans who are against this war, but are under various pressures to remain silent.

From its inception, IVAW has called for:
• Immediate withdrawal of all occupying forces in Iraq;
• Reparations for the human and structural damages Iraq has suffered, and stopping the corporate pillaging of Iraq so that their people can control their own lives and future; and
• Full benefits, adequate healthcare (including mental health), and other supports for returning servicemen and women.

Our membership includes recent veterans and active duty servicemen and women from all branches of military service, National Guard members, and reservists who have served in the United States military since September 11, 2001.
IVAW’s strategy is to mobilize the military community to withdraw its support for the war and occupation in Iraq. Therefore, IVAW is leading the movement of veterans and GIs who are working to bring the troops home now.
Today, IVAW members are in 48 states, Washington, D.C., Canada, and on numerous bases overseas, including Iraq. IVAW has chapters around the country and in Canada. IVAW members educate the public about the realities of the Iraq war by speaking in communities and to the media about their experiences. Members also dialogue with youth in classrooms about the realities of military service. IVAW supports all those resisting the war, including Conscientious Objectors and others facing military prosecution for their refusal to fight. IVAW advocates for full funding for the Veterans Administration, and full quality health treatment (including mental health) and benefits for veterans when they return from duty.