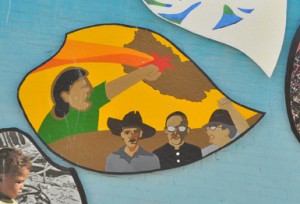 We are a grassroots organization dedicated to supporting the Salvadoran people’s struggle forself-determination and social and economic justice. The alternative that they are building –an alternative based upon democratic and socialist ideals–is an example to all people who seek a world free of domination and exploitation. We support that alternative because we believe that capitalism is a fundamentally unjust, oppressive and ecologically unsustainable economic system. We join with poor and working people, immigrants and refugees in the struggle against neoliberalism– the current manifestation of capitalism imposed by the United States government and its state, institutional and corporate allies. Neoliberal policies continue to produce enormous suffering and destabilization around the world. We focus our work on El Salvador because of the U.S. government’s continuing military, economic, and political intervention on behalf of U.S. corporate interests, and because the Salvadoran people’s tenacious and inspiring struggle to build social justice.