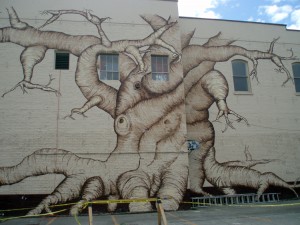 PLEASE SCROLL DOWN FOR ARTIST BIOS

The Israeli occupation has specifically targeted this plant due to its symbol of identity for Palestinians and its economic benefits. Since the second Intifada, more than half a million olive trees have been uprooted from Palestinian lands. Palestinian resistance or sumood means Palestinians producing olive oil although the occupation limits their movement and forbids them from reaching their lands. “Sumood” is Palestinians producing olive oil although the racist Apartheid Wall prevents farmers from harvesting their olives and uproots trees anywhere near it.

The supreme judge in Palestine, Tayseer Al-Tamimi, has denounced what he calls the “repeated crimes of the Israeli occupation authorities against all things Palestinian, be they human beings, stones or trees”. The judge was speaking after dozens of olive trees in the town of Burin, south of Nablus, were destroyed by the Israelis; the trees date back to the Roman period of history. Al-Tamimi has urged the United Nations Food and Agriculture Organization (UNFAO) to “protect the agricultural land of Palestine which is being seized and destroyed in order to build illegal settlements”. He called upon the organisation to protect the olive trees, which he describes as the historic source of livelihood for tens of thousands of Palestinian families.

Season of terror
Season of Terror The olive harvest season is the most important for a large segment of Palestinian society. The joy experienced at this time is often tempered by fear and anxiety because of increasing attacks on olive groves by colonial-settlers intending to sabotage the harvest.

The suffering of the Palestinian farmers is exacerbated by the actions taken by the Israeli government, which restricts their movements and prevents them by means of the apartheid wall and check-points from reaching their fields. The Israelis subject the farmers to lengthy inspections

The harvest season is usually a time of hectic settler activity, especially by those who live near olive groves owned by Palestinians. On one occasion, a leaflet was distributed by an extremist association urging settlers to cut down the olive trees and attack Palestinian farmers.

The same leaflet regards the olives grown on 900 square kilometres of the West Bank as being contradictory to the rights of the settlers to use the land of what they call Judea and Samaria.

According to a study conducted by the Palestinian Ministry of Agriculture, almost 11 million olive trees were planted in 2007, covering about 914 sq km in total. This constitutes around 45% of the total Palestinian land under cultivation and about 80% of the fruit farms.

Most of the olive groves are rain-fed, with the exception of 24 sq km under controlled irrigation, in the southern provinces and the Jordan Valley. The study says that olives constitute more than 20% of the total agricultural production.

Moreover, olive trees occupy approximately 50% of the cultivated land in the West Bank, with around ten million trees surrounding West Bank cities. In Gaza, the cultivated area totals about 26 sq km, of which about 20.5 are for fruit trees.

Destruction of tress by the Israeli military and settlers:

According to the Palestinian Ministry of Agriculture “a productive olive tree is uprooted [by the Israeli military and settlers] every minute in the occupied Palestinian territories”. In total, one million trees have been uprooted to-date.

According to many official reports, more than half a million trees, 80% of which are olive trees, have been uprooted by the Israeli authorities since the eruption of the first intifada in late 1987. The reason given was that the trees were used as cover by Palestinian fighters; records show, however, that the Israeli Army does not abandon the tactic of uprooting trees during the relatively stable periods.

More than 22 sq km of olive groves have been destroyed since the signing of the Oslo agreement. The argument employed by the Israelis for this has been the construction of bypass roads “in the service of peace”. It has been reported that settlers steal fruit and burn trees, occasionally spraying the trees with chemicals for this purpose.

According to official statistics, the total area of land affected in this way has reached 42 sq km. Around 19 sq km of land are isolated behind the notorious Israeli wall. Amazingly, the military has classified about 15 sq km as “hazardous areas” due to their proximity to the illegal settlements.

It has been recorded that most settlers’ attacks against Palestinians and their farms occur near the towns of Ramallah and Nablus. According to the Palestinian Ministry of Agriculture report, about 1100 trees were set on fire by settlers during the first months of 2007. The official records of the Israeli Civil Administration show that 1846 trees were destroyed between January and June 2007. This figure was challenged by the Palestinians who claim that the figure does not include attacks which went unreported.

Uprooting trees on the route of the separation wall:

The separation wall has been one of the primary causes of destruction of large numbers of olive trees. It is well known that the construction of the wall, which will eventually be 460 kilometres long, necessitates the destruction of fertile agricultural land.

A swathe of land 200 metres wide has to be bulldozed in order to build the wall; an additional 50 metres is needed for the construction of settler-only roads. The wall has cut off thousands of acres of agricultural land from the framers; this constitutes the largest percentage of olive farms, particularly in the northern West Bank.

These fields – which are effectively “abandoned” if their owners cannot work them will become barren, making it easier for the government and settlers to seize them to build more colony-settlements. Land owners have no right to challenge and resist the Israeli policies that rob them of their livelihood and source of income for their families.

The blockade imposed on the Gaza Strip has had a negative impact on agriculture and the olive industry. The olive harvest and olive oil season in Gaza was significantly worse in 2009 due to the war and siege.

The olive production in Gaza has declined by 80% compared to previous years. Four sq km of olive groves were completely destroyed by the heavy armour and bombs used in the war a year ago. The embargo on imports and exports has led to a decline in the production levels of olive groves and olive oil. The owners of olive presses are facing huge difficulties.

According to Mohammad Agha, the Minister of Agriculture in the Gaza Government, the Israelis bulldozed about 130 sq km during the years from 1967 to 2005, mostly olive groves. Agha said that the shelling and white phosphorous rockets and other chemical weapons used in the recent war had a hugely detrimental effect on the fruit yield.

The decline in olive oil production caused prices to rise steeply this year. The owners of the presses face additional difficulties in trying to get spare parts, which often have to be smuggled in due to the blockade.

According to a senior official at the Ministry of Agriculture, the Gaza Strip has produced two hundred tons of oil this year, compared with 1500 produced in normal years. The same official said that 3250 tons are needed for Gaza to meet the requirements of domestic consumption.

It is clear that the extent of the destruction of olive trees by the Israelis is beyond comprehension and can not be justified under any circumstances. However, the international indifference to this spiteful devastation and flagrant violation of Palestinian rights have encouraged the Israeli army and settlers to continue their activities.

The uprooting of more than one million olive trees constitutes an appalling assault on the environment; one that has received no condemnation from the international community, let alone holding the perpetrator accountable for this crime.

Olive Tree was painted by:
Carrie Ziegler:
Carrie Ziegler designed and coordinated the production of the olive tree for the Olympia Rafah Solidarity Mural Project. Carrie is an Olympia artist known for her environmental, social justice and nature oriented art. Her most recent work, The Woodland Trail Community Mural Project, has received great acclaim and transforms an industrial zone along a bike trail into a place of beauty and intrigue. The mural covers over 6000 ft2 of wall and involved over 40 volunteers. Carrie loves working with clients and community groups to create a vision for the desired artwork, then taking that vision and making it a reality that brings beauty and inspiration into people’s lives. She paints both interior and exterior murals in a variety of styles for homes, businesses and community groups. You can view some of Carrie’s murals here  http://picasaweb.google.com/111292559199475830946/MuralsByCarrieZiegler# and can contact  her at myeart@gmail.com.

Alicia Martinson:
Alicia Martinson has worked as a project coordinator for the Olympia-Rafah Solidarity Mural Project for over two years. As a student at the Evergreen State College Alicia began working on the project as an intern in the spring of 2008. Alicia has worked on different aspects of the project including fundraising, administration, coordinating interns/volunteers, community outreach, and production. While at Evergreen Alicia focused on political and social studies, studying the relationship between art and activism. She has completed two murals in Minneapolis, MN and has worked in collaboration with Project Director Dr. Susan Greene and many other artists on the artistic vision for this mural. After graduating from Evergreen Alicia worked full time as the lead local project coordinator in Olympia and facilitated the participation of over 40 local organizations.  She is currently working on the next phase of the project, gathering audio files from each organization in order to expand the projects mission and create more opportunities for building change.