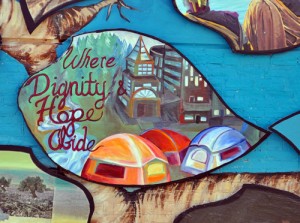 A Safe Community
Camp Quixote is a tent city that provides safe haven for people experiencing homelessness.
The camp is a member run, democratic community that operates with the aid of a broad-based support committee known as the Panza group.

Camp Quixote was initially created to protest the new sidewalk law passed by the City of Olympia. As the street community watched their access to public space shrink, they gathered to organize and stake their claim to exist – openly and without shame.

Though the camp was born of a confrontation, its goal was full inclusion in the wider community. Moved by the courage -and the need- of the campers, the local Unitarian-Universalist Congregation stepped up and offered to host the camp. Since then, Camp Quixote has been hosted by The United Churches of Olympia, St. John’s Episcopal Church, and the First United Methodist Church. The camp is scheduled to move to the First Christian Church (Disciples) shortly after Christmas.

The City of Olympia, which initially opposed Camp Quixote -describing it as a “poke in the eye”- quickly turned from its position to embrace and support the camp. The City passed a very generous temporary ordinance in August permitting and regulating the existence of tent cities. That ordinance will soon be replaced by a permanent law.