BTS works across movements- using culture to create alliances as well as perceptual ‘ruptures’ or ‘disturbances’ wherein people have the opportunity to see connections that they had not seen before, and to imagine new possibilities. BTS works in partnership with a wide range of organizations, from mental health programs in Gaza, to environmental organizations, to organizations providing material aid, to those organizing non-violent resistance. Our ultimate goal is to use culture as an organizing tool to bring people together across movements. Our cultural products are then used by activists and organizers in their work to touch and move people.

This mural, “Our Roots Are Still Alive” was painted by BTS upon returning from its inaugural trip to Palestine in 1989.  Each image in the mural contained a story.  One story is about the book the girl is reading under the tree.  It is by Ghassan Kanafani, whose books were banned by Israel in 1989.  Kanafani was assassinated in Lebanon on July 8, 1972.  Below you can see and hear writer and critic John Berger reading one of Kanafani’s short stories “Letter from Gaza.”

“Our Roots Are Still Alive” was located on 21st Street and Mission in San Francisco.  In 2000 after the second Intifada began this mural was increasingly attacked and the owner of mural the site threatened with bodily harm. The city refused to consider it a hate crime and so the mural was covered with panels of wood.  The plan and hope is to be able to uncover it in a future world. 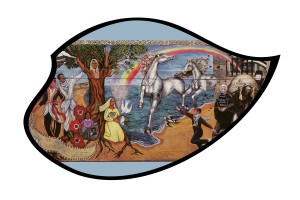