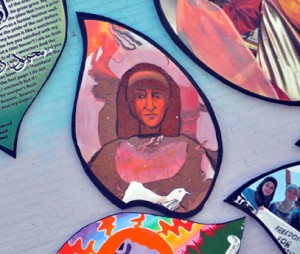 http://faculty.washington.edu/bnaidus/
Beverly Naidus has been making art about social and personal concerns for over three decades. She works in many mediums, allowing the content to determine the form.

Audience participation (story telling and game playing) in response to her installations and artist’s books has been a significant part of her work for many years. Topics in her work include healing from environmental illness, body hate and fear of difference, nightmares about nuclear war and the ecological crisis and dreams for a reconstructed world.

Her work has been exhibited internationally and written about in many books and articles. After many years of participating in the New York City and Los Angeles activist art worlds, she now resides on Vashon Island, WA with her husband, founder of SEEDS (www.socialecologyvashon.org), and son.

She teaches art for social change in the Interdisciplinary Arts and Sciences program at the University of Washington, Tacoma. The curriculum of that program is highlighted in her recent book, Arts for Change: Teaching Outside the Frame (New Village Press, 2009). She travels frequently to lecture, lead discussions and workshops on art for social change.

Homeland Bodhisattva is part of series of digital images entitled “Healing Deities.” This series was created as a form of visual meditation and healing, and explores how the resources within one individual can confront the environmental crisis, oppression and injustice. Homeland Bodhisattva is my response to the continuing abuse of the Palestinian peoples. This work was first created at the beginning of the Second Intifada (2000).

As a person of Jewish heritage who is often filled with shame by the actions of the Israeli government, this work gave me a way to articulate my solidarity with a powerful, anonymous Palestinian woman who while witnessing the violence, claims a space for resistance to oppression and desires a peaceful resolution of the conflict. The title refers to the quest to return to a homeland and the notion all human beings are in the process of becoming a “Buddha.” The digital image was created with Painter, Photoshop and a Wacom tablet and stylus.