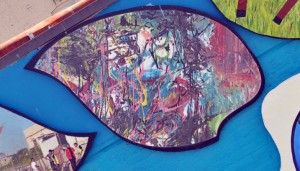 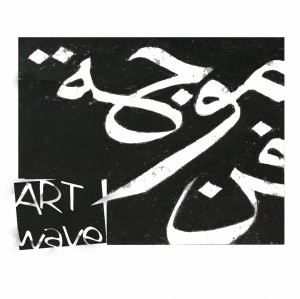 The Ramallah based Mojat Fan (ArtWAVE) project, undertaken by a group of Palestinan artists from all over historic Palestine, celebrated a successful first workshop series and exhibition this week. A group of twenty emerging Palestinian artists gathered to forge connections, create collective work, and experiment with art as a context and form for communication across barriers. The group hosted a final street-art performance live simultaneously in Ramallah and Haifa, linked together by internet connection.

ArtWAVE was coordinated by Ayed Arafah of the International Academy of Art Palestine and Rosi Greenberg from Brown University. Ayed and Rosi developed the workshop based on their work with several organizations last summer and their assessment of what would benefit emerging artists in Palestine today. Unaffiliated with any one organization, the project was made possible through the generous support of the Art Academy, Brown, and many culture and arts organizations in Palestine (full list below).

The organizers aimed to create spaces for communication between Palestinians with Israeli citizenship and Palestinians living in Jerusalem and the West Bank. Organizers believe that art depends on the context in which the artist creates it, so it is crucial for Palestinian artists who share an identity to be able to exchange views on their environment and share in artistic production. “Instead of depending on America or Europe or Israel, we need to depend on each other as Palestinians,” said Ayed Arafah. “The idea of mojat fan isn’t politics–it’s art as resistance, art as a way of developing more understanding of identity and of the responsibility of artists in our society.” For many participants, ArtWAVE was a first experience working with Palestinians from the other side of the Green Line, as Israel’s formalized system of separation largely prohibits most contact.

Over the course the four-day workshop, emerging Palestinian artists (of a range of experiences and preferred medium, aged 17 to 35) from Acca, Bethlehem, Bet Hanina, Haifa, Hebron, Iqrit, Jenin, Jerusalem, Kufr Yassif, Nablus, Nazareth, and Ramallah came together at the Hallaj gallery of the Palestinian Association for Contemporary Arts.

On the first day of the workshop, participants shared in introductions, group-building, and discussions on the context and meaning of individual Palestinian identities in different areas. The group visited the Qattan Foundation, the Khalil Sakakini Cultural Center, and the Young Artists Forum to introduce the emerging artists to the range of orgnizations available in Ramallah and to forge connections between artists and organizations for possible mutual support in the future. In the evening, each participant presented his or her work to the group.

On the second day, the workshop began with individual participants’ presentations of their artwork, which was inspiring and appreciated by all. This was followed by a presentation by Alam Massad on his work and thoughts on the responsibility of the contemporary artist to bring the public into the world of art in more creative ways. Renowned artist Khaled Hourani followed, speaking about his work and the history of Palestinian art, as well as the importance of process rather than just product in artistic production. The participating artists worked together to conceptualize and design a series of windows which had been discarded in building construction but retrieved for this project. The artists then visited the Mahatta gallery for a short presentation and tour of the gallery’s latest exhibition.

The window designing project was aimed to be a momentary expression of the conversations on identity and separation at that point in the workshop. One piece consisted of two artists (one living in Deheishe refugee camp, originally from Qastina village, the other living in Haifa, originally from Iqrit village) sitting on either side of their window and speaking with one another as they painted on the glass, scraped the paint off, and finally opened the window together. Another pair placed their plain window on red-painted stones overlooked the rolling Palestinian hills, an expression of separation from place, violent events, and large-scale inaction. One artist painted both sides of her window with outlines of buildings, while another pair decided to place their empty window on a top floor of a building in construction. Another two artists tied up and painted their windows to express restrictions and barriers. One window broke halfway through the design process so the artists carefully taped the shards of glass together, leaving the window fragile and vulnerable, creaking as it broke further over the course of the day.

On the third day of the workshop, several new artists arrived from Jerusalem, Nazareth, and Acca while the majority of the ’48-based artists returned home to their work and other responsibilities. The new artists presented their work to the group and then the group began designing concepts for the final project (explained more below), assisted by Academy director Dr. Tina Sherwell. The group returned to the Mahatta gallery for a presentation by renowned artist Vera Tamari on the Birzeit University Virtual Gallery, which all said was a very helpful new resource for their work. Artists then participated in a discussion on the relationship of art to politics, prepared by Femke Nordink and Katerina Mrazkova, volunteers with the International Academy who will be curating an exhibition on the same topic in October.

On day four of the workshop, participants met with artist Rana Bishara for a presentation on the meaning and form, process and product of her artwork. Following the presentation, artists continued to plan for the final project and discussed ways to continue connections in the future.

Participants decided that the final exhibition of the work would consist of a mural painted half at the Fattoush restaurant in Haifa and half at the Mahatta gallery in Ramallah, connected live over the internet to seem whole. In both locations simultaneously, artists painted their half of the mural as they were filmed and projected onto the wall in the other location. The piece created a window between Haifa and Ramallah, speaking about separation and connection and using art as a form of resistance against physical barriers.

Rather than design the mural before the event, the artists decided to invite friends and passers-by to a small coffee-cup of paint, with which they could add color to a blank canvas. The work began with one black line drawn from the middle of the canvas, half in paint and half virtually. Then all participating artist began painting with one another, the live and projected people blending with one another as the painting spread on the canvas. As they painted, artists remained in contact through skype and cell phone connections. In Ramallah, the painting turned out very full of color, whereas in Haifa there was more fragmentation, more white space at first. “Maybe they understand there more about their identity, they’re more sure and able to claim it, while we’re struggling to have a whole picture of ours,” said one participating artist in Haifa. “It doesn’t matter if they look exactly like the same mural. It speaks to the fragmentation.” The two halves of the painting will be sewn together and installed in an art gallery in Jerusalem.

Participating artists have committed to maintaining connections with one another after the workshop and exhibition. A Facebook group, listserv and website are being created for ArtWAVE artists to be in communication with one another about future exhibitions and projects. A series of monthly workshops may also be planned to continue to bring together emerging artists from all over Palestine to develop their work together. The workshops took place in Ramallah due to the severe restrictions on movement imposed on Palestinians with West Bank ID cards, but the artists hope to find creative ways to move future workshops to other locations or use virtual connections.

The International Academy of Art Palestine generously sponsored ArtWAVE through donations of materials and gallery space. The project was also sponsored by the Brown University International Scholars Program and Creative Arts Council. Ayed and Rosi especially thank Khaled Hourani for his generosity in time, resources, and advice- this project would not have been possible without him.